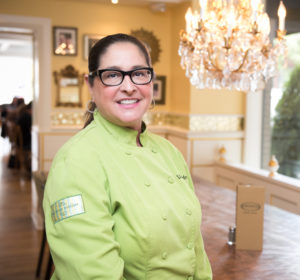 Lisa Schroeder is the executive chef and owner of Mother’s Bistro & Bar in downtown Portland and author of “Mother’s Best” cookbook. She is a graduate of The Culinary Institute of America and was chosen as a Top Student Chef by Food and Wine Magazine. She honed her cooking skills at Le Cirque and Lespinasse in New York and Moulins des Mougins and L’Auberge de L’Eridan in France. She opened Mother’s Bistro & Bar in 2000 to rave reviews and the “Restaurant of the Year” title from Willamette Week.

Lisa has appeared on the Today Show, Good Morning America, Roker on the Road, QVC and many other television programs. She was the recipient of the Oregon Commission for Women Woman of Achievement Award for 2014, Portland Business Journal’s Businesswoman of the Year award, International Association of Culinary Professionals Chef/Restaurateur Award of Excellence and Restaurateur of the Year by Independent Restaurateur Magazine.

Mother’s Bistro & Bar has received numerous accolades as well, including “Top Restaurant Bargain” from Food and Wine Magazine, “Best 101 Breakfasts in America” from Urbanspoon and consistent “Award of Excellence” from Tripadvisor. Lisa is actively and philanthropically engaged in our community.